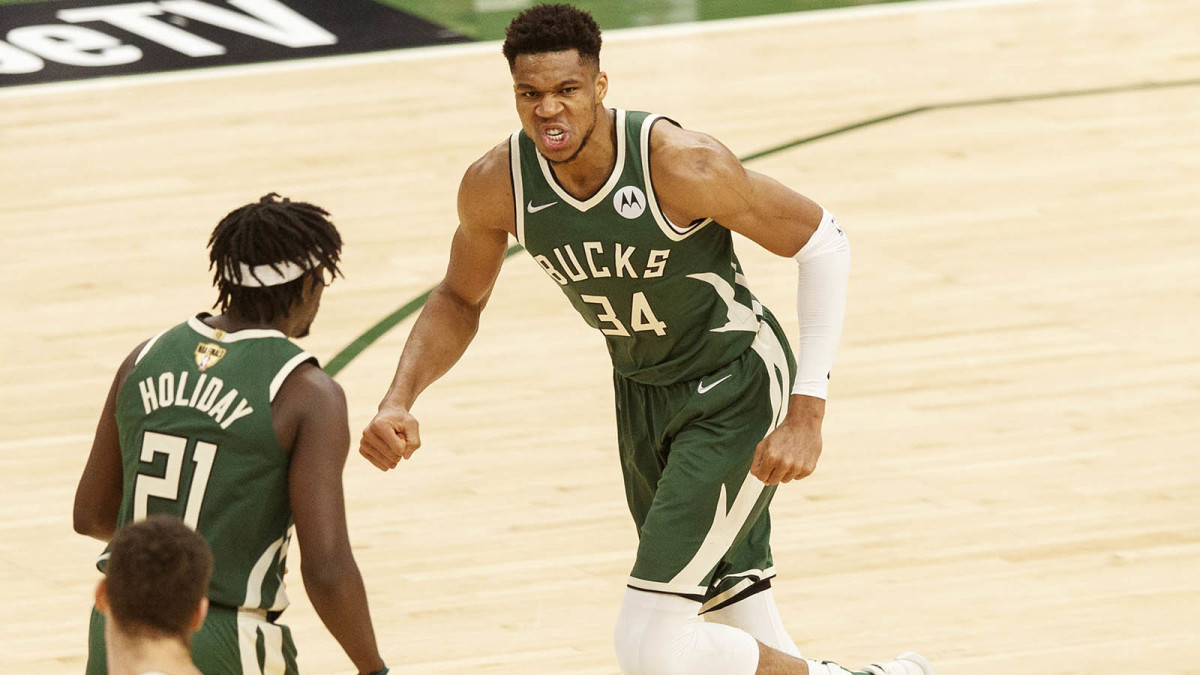 Despite his hyperextended left knee injury in the East finals two weeks ago, Giannis Antetokounmpo is putting up historic numbers in the 2021 NBA Finals.

Notching over 40 points in the past two games against the Phoenix Suns, the Great Freak is looking to continue his scoring run to even out the series tonight in Milwaukee.

After a 42-point performance in game 2 loss in Phoenix, Antetokounmpo dropped 41 points in game 3, leading the Bucks to their first win in the series.

“I’m not Michael Jordan,” Milwaukee’s star said. “I’m just out there trying to enjoy the game, trying to play, trying to put myself in a position to be successful. That’s what I’m trying to do”. Despite him stating the opposite, what Antetokounmpo is being able to achieve is remarkably “Jordan-esque”.

Giannis is just the second player since Shaquille O’Neal in 2000 to have two consecituve 40-point and 10-rebound games.

In NBA finals’ history only three other players had back-to-back games of at least 40 points: Jerry West in 1965 and 1969 against the Celtics,  Michael Jordan four consecutive times in the 1993 finals against the Suns, Lakers’ Shaquille O’Neal in 2000 in game 1 and 2 against the Suns.

The Milwaukee Bucks are trailing 2-1 going into game 4. “We got better from game 1 to game 2. And now we got better from game 2 to game 3” Antetokounmpo said. “We have to keep building, keep trusting one another. Keep trusting winning habits and making winning plays. Keep competing hard and keep doing it together,” he explained. His teammates are used to his spectacular performances. “I have seen him do a lot of stuff like this, it doesn’t surprise me,” Khris Middleton commented after the Bucks’ win in game 3. “To see him do this for a while, and now it’s on the biggest stage and everybody is getting a chance to see what he goes through. How he’s hurt and still finds a way to go out there and compete and be productive and dominant at the same time,” he explained.

Chris Paul and the Giannis Wall

On the other side, an impressive Chris Paul is trying to lead the Suns to a third win in the series. The 36-year-old veteran playmaker is definitely the engine and pace-maker of the young Phoenix team.  Paul speaks of Antetokounmpo with admiration and he is trying to concoct a plan to limit Giannis’ effectiveness. “Regardless of how he scores, he does it,” Paul said. “You know what I mean? He comes down there, he dunks, he dunks some more and he shoots a layup. So, it is what it is. I think you got to figure a way to stop him. We have to try to figure out a way to slow him down”.

Can the wall be the solution? “It’s funny that there’s a defense out there called the ‘Giannis Wall’ … I hate it though” Antetokounmpo commented.