Deontay Wilder’s story not finished yet 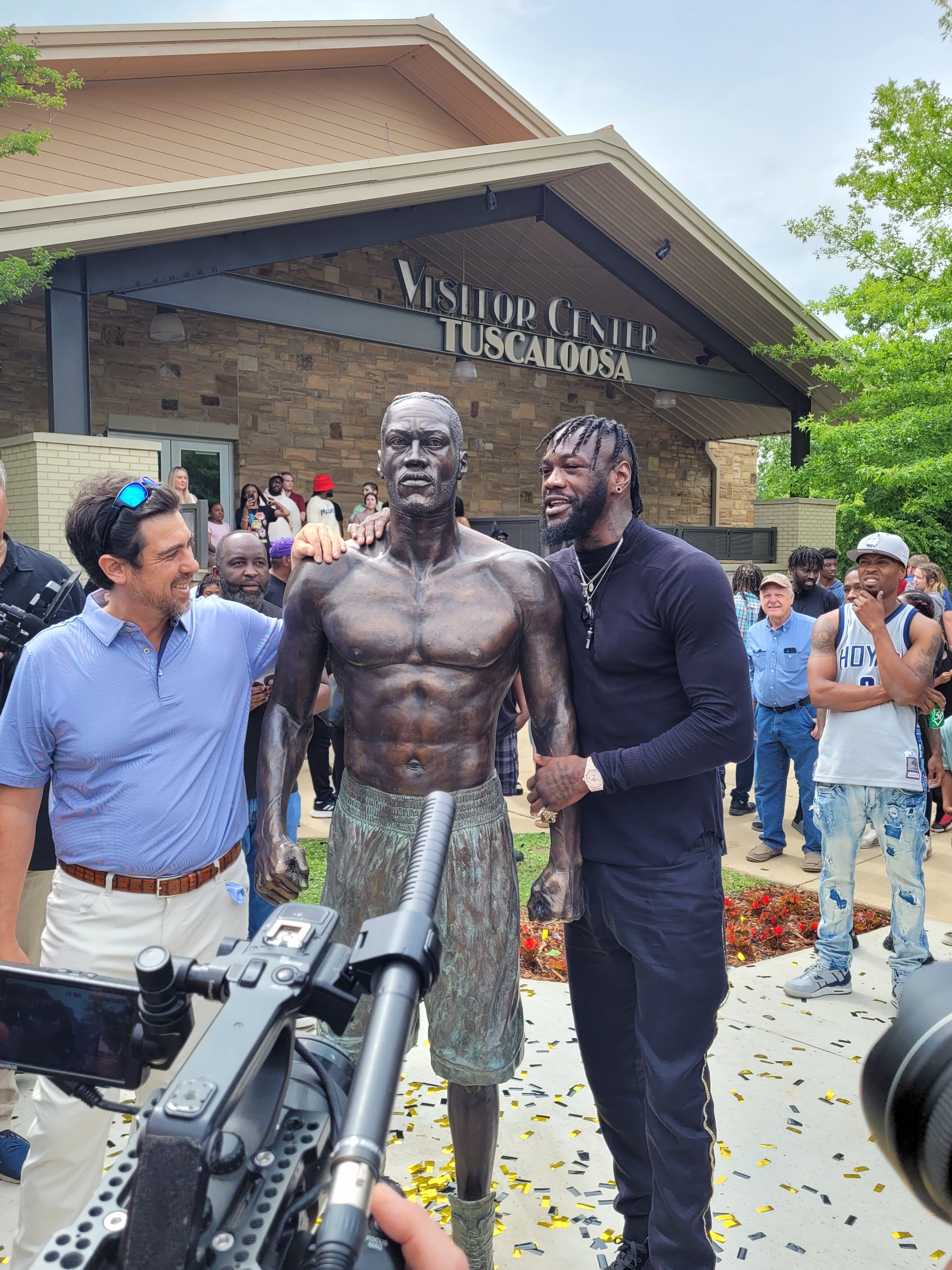 On Wednesday, the City of Tuscaloosa (Alabama) unveiled a statue of former heavyweight champion Deontay Wilder.

Hundreds attended what was originally planned to be a small ceremony held in the mid-
afternoon of a workday. Something was missing though.
Statues honoring historical and sports figures are often accompanied by plaques describing the person
depicted and their achievements. This one was not. According to the sculptor, Caleb O’Connor, that will
come later. The wording still needs to be worked out telling the story of the Bronze Bomber but maybe
that was just as well.

Wilder spoke at the ceremony and did not seem ready to put a period at the end of a nearly 14-year professional career.
Wilder, looking as fit as ever and smiling throughout the day, acted like a man who was moving forward
and not ending his career. He spoke more this day than he famously did during the buildup to his last
fight against Tyson Fury.

Trainer Malik Scott was there, but this time he didn’t do the talking.
Tuscaloosa Mayor Walt Maddox introduced Wilder as well as longtime trainer and manager Jay Deas.
During his speech, Maddox described how they had transformed Tuscaloosa and brought the sport of
boxing into the mainstream to Tuscaloosa and the State of Alabama.
Deas followed up and outlined how Wilder started out and his path to the 2008 Beijing Olympics. That
journey featured a meteoric rise where he knocked out several of his first amateur opponents before
being told he had to compete at a higher level at the Golden Gloves. Deas then described looking at the
records of the boxers Wilder faced and seeing the opponents at the Olympics had sometimes hundreds
of fights compared to the couple of dozen Wilder had at the ripe age of 21.
Then it was Wilder’s turn.

Wilder, as he always does, did not use any notes and spoke from the heart, thanking all that had worked with him in his career and discussing the dedication he put in to get there.
Then, like his famous right hand coming out of nowhere, he said the words that traveled the world in
lightning-fast time, “I can’t stop right here. I must continue my journey. I have to, I have to.”
Cheers went up in the crowded Tuscaloosa River Market and Wilder took them all in before finishing his
speech. He ended with a message to his children about how the statue will always be there for them
even after he’s gone.
Finally, the Bronze Bomber’s statue was unveiled. The missing plaque was barely noticed during the
ceremony and that is just as well.

That story is still being written and won’t be completed for a while longer.

Benavidez to Plant, Charlo, 168lbs division after conquering interim WBC belt: I am waiting. I guarantee I knock everyone out
Edgar Berlanga stays undefeated, tries a Mike Tyson-like bite or two