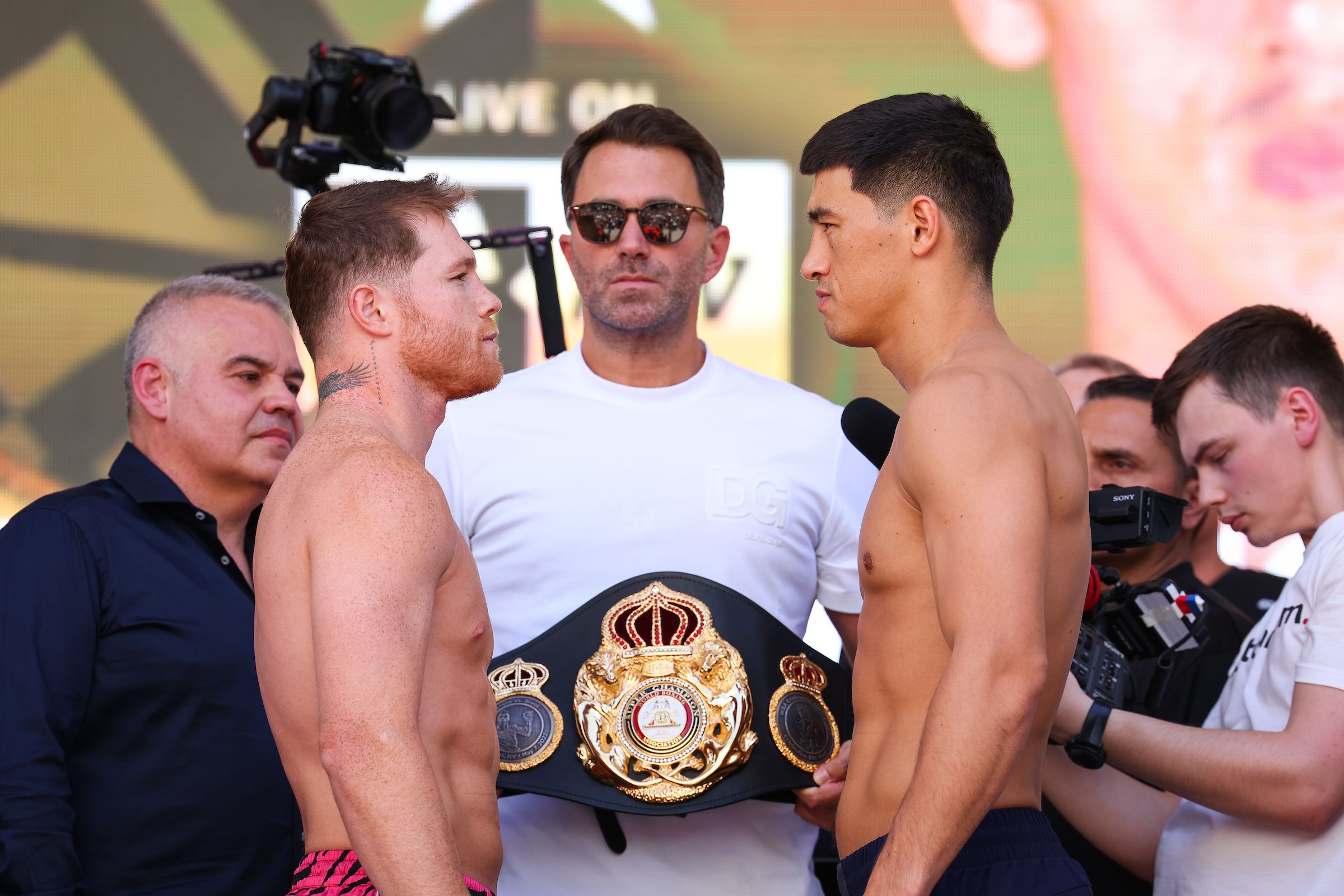 Dmitry Bivol enters the contest with 9 straight title defenses (including interim title status). The 31-year-old Russian fighter is in his prime and very professional. He is hungry and will be well prepared.

Bivol’s last six fights ended in 12-round decisions in his favor. Decisions that go the distance sometimes signal “superior boxing” skills, but Bivol’s power should not be discounted. The WBA light heavyweight champion throws dynamite with both his left and right hands. This bout is a huge opportunity for him.  However, he will need a modified game plan for this extremely talented opponent.  His very visible, effective style of attack may have to be adjusted. There is no question that Bivol has all the tools to win the fight. His naturally larger build, height, reach are all advantages in his favor.  Nevertheless, Canelo has fought taller opponents with greater reach advantages.

Look for Bivol to press the fight, even if he sticks to his previous fighting style, especially in the early rounds.  This will be his best chance to establish ring control and inflict damage on Canelo Alvarez.  The 6-foot defending champion  probably has even odds to win the fight and seems definitely strong enough to even knock Canelo down.  Dmitry Bivol is among the top across all divisions for jabs thrown and among the lowest for power punches landed against.

Canelo aims to enhance his legacy

Canelo Alvarez, a 4-division World Champion, looks to solidify his ongoing legacy building by competing for another World Title in the Light heavyweight division.  As of late, his choices of opponents seem to excite his fan base and equally upset any potential opponent across three weight classes he didn’t decide to contest.  Canelo considers Dmitry Bivol a timely challenge.

After having cleaned up the 168-pound division, he opted for a step up in weight class against a champion in his prime.  Alvarez’s decision upset the likes of David Benavidez, Jermaine Charlo and previously Demetrius Andrade.  Saul “Canelo” Alvarez and his long time trainer Eddy Reynoso, think they have figured out a strategy and path to another victory against a larger, gifted opponent.  “He’s a really good champion, a really good fighter. We know that. He has a lot of skills, a lot of amateur experience,” Canelo said of his opponent during the final pre-fight press conference.

“He is a solid champion at 175. But I’m ready. I believe in my skills and how strong I am.

I like challenges, this is going to put me up in the boxing books, I feel alive when I have these challenges. It’s my time, I’m at the top of my game and I enjoy these moments.”

Canelo explained his decision to challenge Bivol. “I beat everyone at 168 I’m fine at that weight. I want another challenge for myself, not just to make history. At 175 pounds I have a chance to win another title it’s awesome for me.”

The 5’8” Mexican superstar has discussed his strategy recently in interviews.

“Be patient. Be Patient.  Find a way to get inside. And be patient,” he said. This sounds like the game plan he used against both Caleb Plant and Billy Joe Saunders.  Both taller opponents with reach advantages.  Comparing CompuBox Numbers, Alvarez’s punch count dropped from a very active 505 (first fight vs. Gennady Golovkin) and 622 (second fight vs. GGG) to 251 punches thrown vs Caleb Plant (11 rounds) and 206 vs Billy Joe Saunders (in 8 rounds).  This is a change of tactic that may reflect what he calls his “patient” approach for this upcoming clash. Alvarez landed over 50% of his power punches against Saunders.  Canelo ruined Saunders’and Plant’s  rhythms and broke them down by employing the high guard, head movement and counter power punches.  He dropped considerably the number of overall punches and markedly his number of jabs thrown.

I consider Saunders to have been the most dangerous opponent Canelo has fought in years.  I think Bivol may be not as slick as Saunders but brings the extra speed and power that are dangerous for Canelo.

Predicting the outcome of this fight is not an easy task, but for a typical Canelo victory I don’t see the fight ending early.  If his strategy works I can see it going to the judges for a decision.

However, Bivol can end it earlier.  He has the speed and power in his favor for an early night.

Grateful for this opportunity, Bivol respects the pound-for-pound king of boxing, but thinks he will be able to keep his title. “I’m going to keep my belt, I want to win,”Bivol stated. “Of course I respect him, he’s a great champion. It’s a challenge for me not only to keep the title but to show all my skills.”

“Expect everything from me” Canelo said on the Toshiba Plaza’s stage after the weigh in. He showed a lot of love to his Mexican fans attending the event. “Que viva Mexico, cabrones!” he joked.

“I have had many fights, I won them all, so I don’t see why I shouldn’t win this one,” commented Bivol on stage.

According to BetMGM, Canelo is the favorite and Bivol a notable underdog.