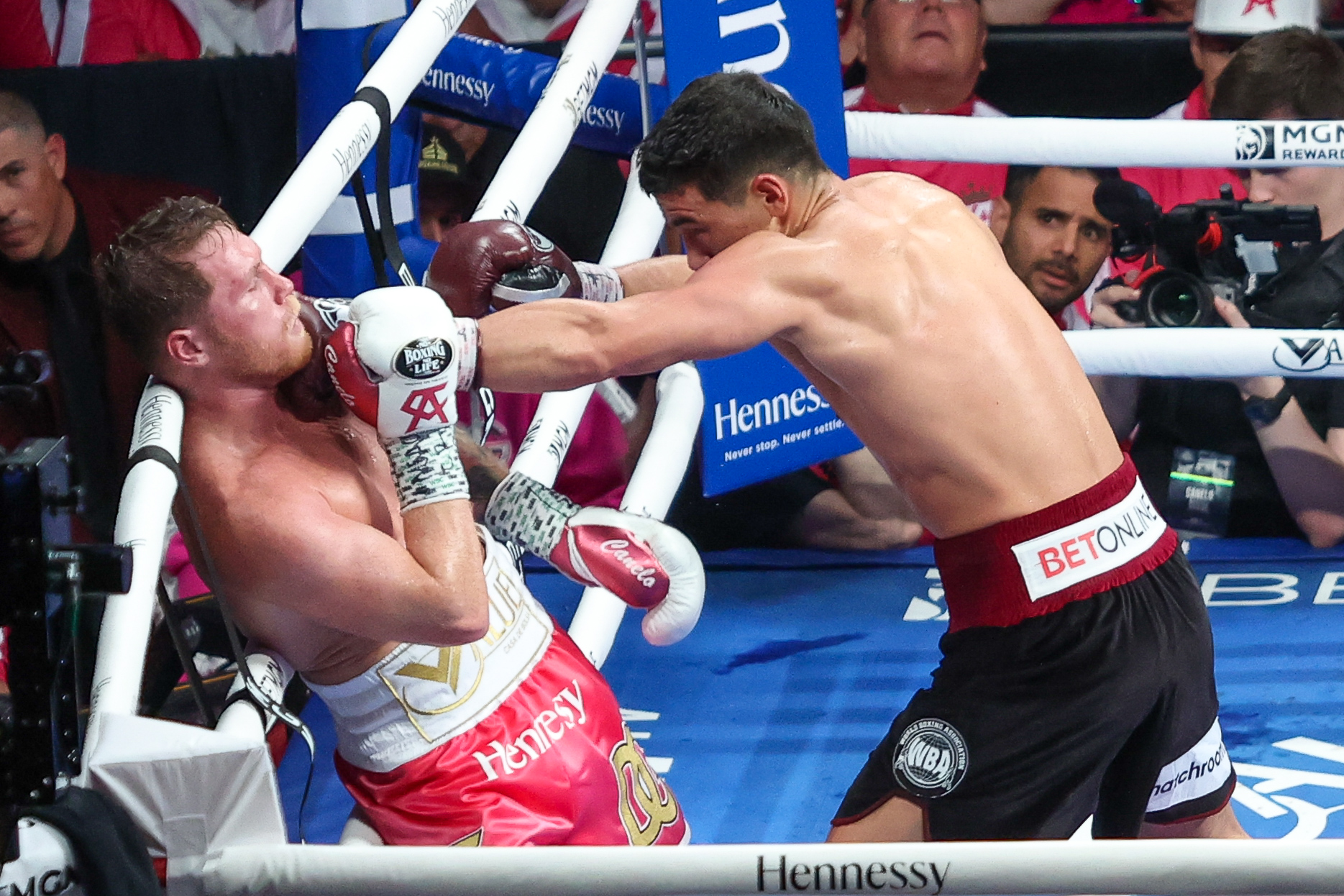 Dmitry Bivol (20-0, 11 KOs) remained undefeated and pulled the upset, beating by unanimous decision the four-division champion Canelo Alvarez (57-2-2, 39 KOs) on Saturday at the T-mobile Arena in Las Vegas. The Russian underdog threw more punches than the Mexican superstar and was able to retain his WBA light heavyweight belt.

While Canelo threw and average of 41 punches and landed an average of 7 per round, his opponent averaged 59 and 13.

“He beat my arm up,” Bivol said on the ring after his win, showing how red his arm was.

The key for his victory? “He only threw hard punches and after hard punches he was a bit tired. Canelo is a good counter-puncher, but I made him be more forward and I was the counterpuncher today. It was the key.”

Bivol was able to outwork and outbox his opponent, who appeared tired and frustrated in the last few rounds.

In round 11 Canelo even lifted Bivol off the floor on his shoulder. Boxing fans joked: Was he looking for a body slam? Is it Dancing With the Stars?

Canelo on the ropes a lot

Bivol had a size and reach advantage. He proved to have excellent boxing skills and pushed Canelo to the ropes a lot. When asked about it, Alvarez admitted that might have been a way to “rest a little bit”.

“He’s a great champion,” he said. “Sometimes in boxing, you win and sometimes you lose. I have no excuses. He won the fight,” Canelo said after the fight. A few minutes later, his version of the story changed and he shrugged off the loss.

“I feel really good. I think I didn’t lose this fight,” Alvarez stated in the post-fight presser.  He only won four or maximum five rounds. I got a big tired in the last rounds, but I did things the way I had to. I feel good. I don’t think I lost…Maybe the weight was a slight issue. It made me feel not 100% during the fight.’’

Admitting the biggest difficulty to face was Bivol’s style and not his weight, Canelo said he’d exercise his option for a rematch.

The loss probably slammed the door on Alvarez’s plans for a trilogy bout vs. Gennadiy Golovkin in September. Also, going up even more in weight to face unified heavyweight champion Oleksandr Usyk seems highly unlikely at this point.

“I’m sorry I ruined your plans [for a fall trilogy fight against] Gennadiy Golovkin, maybe,” Bivol said. “Congrats to [Alvarez], he’s a great champion and I respect him,” Bivol commented on the ring after his victory.

While Bivol has entered the Olympus of Greats, Canelo now faces some questions. After a majestic ring entrance, he was knocked off the pedestal of pound-for-pound king of boxing. He ruined the Cinco de Mayo weekend celebrations of thousands of Mexican fans, who were expecting nothing less than another win from one of the greatest Mexican boxers in history.

Will Canelo really benefit from taking this rematch?

Should he still face GGG?

Should he go down to his more comfortable weight class?

Is cleaning up another division completely out of the question at this point?