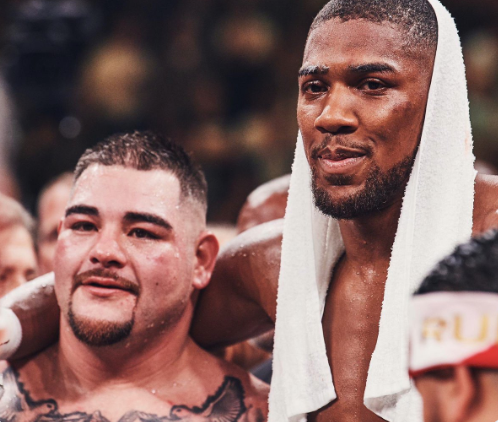 Andy Ruiz shocked the boxing world in New York’s Madison Square Garden stopping Anthony Joshua with a TKO in round 7 to capture the WBA, WBO, IBF, IBO titles in a big upset.
“Mom, our lives are gonna change. We don’t have to struggle no more” said Ruiz, underestimated by many people because of his flabby body.
“I swear that wasn’t a set up” commented Matchroom Boxing’s Eddie Hearn.
The atmosphere in MSG was vibrant and the love of the fans for AJ was more than evident. With “Go Anthony Joshua” choruses, the public was trying to encourage the British champion before and during the fight. Joshua’s American debut didn’t go as expected, but he reacted with big sportsmanship and class, hugging the winner on the ring and insisting to show up at the press conference after having been examined for a concussion by doctors for over an hour after the fight. “The best man won. Respect to Andy” said AJ, clarifying that he had never underestimated Ruiz, despite his physical appearance.
The Mexican fighter hit the canvas first but then he “had to return the favor”, knocking down Joshua 4 times. In round 7, AJ got up and went to his corner. The referee asked if he was able to continue the fight and AJ said yes, but then didn’t move from his corner. The referee stopped the fight, deciding for s TKO.

Who is Anthony Joshua? The British fighter explains what he stands for ahead of his US debut
NBA Finals. Raptors preview of game 4: Danny Green, Marc Gasol, Pascal Siakam. Prima di gara 4, finali NBA