Lara, Castaño fight to a split draw verdict. Ortiz after win vs Hammer: “Joshua, Wilder, if you want me I’m ready” 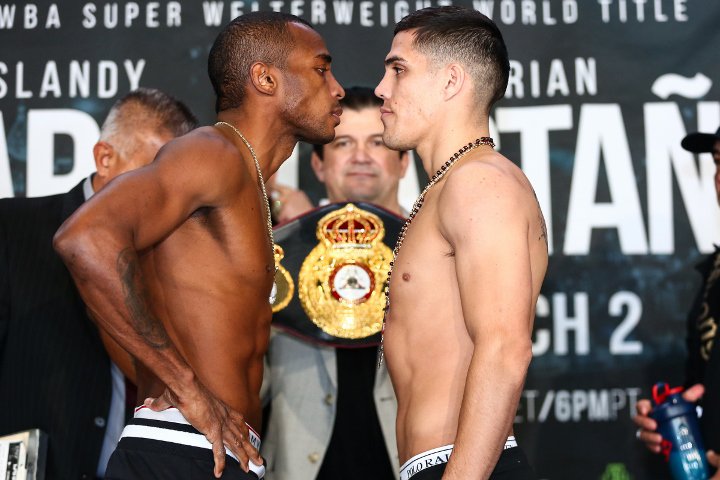 Cuban American Erislandy Lara and Argentinian Brian Castaño fought to a split draw on Saturday night in Barclays Center. Both fighters raised their arms and started celebrating on the ring, believing they had won a very competitive fight. A few seconds later, the split draw verdict was announced: 115-113 for Castaño, 115-113 for Lara, 114-114.

Castano retained his WBA Super Welterweight (154-pound) title. While he threw more punches, former champion Lara was a bit more precise. Despite being 10 years younger, Lara was unable to wear out the 39-year-old Cuban fighter. “Again, I demonstrated I am not old. I’m still fine-tuned” Lara said. “It was a great fight, but I saw myself winning 8 rounds tonight. My punches were much more effective” he added.

The Argentinian boxer disagreed. “It was a good fight. A clash of styles. I know I won the fight. I feel I was robbed. If he wants the rematch, I’ll give him the rematch” Castaño said, frustrated and upset.

In the heavyweight match, Luis Ortiz defeated Romanian Christian Hammer in 10 rounds. This time, the decision was unanimous. “It was a hard fight and my corner really had to work with me…after I got the rhythm I heated up a little bit” commented the Cuban fighter.

Right after his victory was announced, soon to be 40-year-old Ortiz was asked if he felt he still got what it takes to be at a high level. “Every heavyweight should know that I still have it at 40” said the fighter in Spanish. He then sent a message to the heavyweight champions. “Joshua, Wilder, if you want me, I am ready”.

Anthony Joshua on being undefeated, diet, knocking Miller off. Crazy caos at the press conference. Secondo video in italiano
Dmitry Bivol: On the ring I feel I am living
Loading Comments...