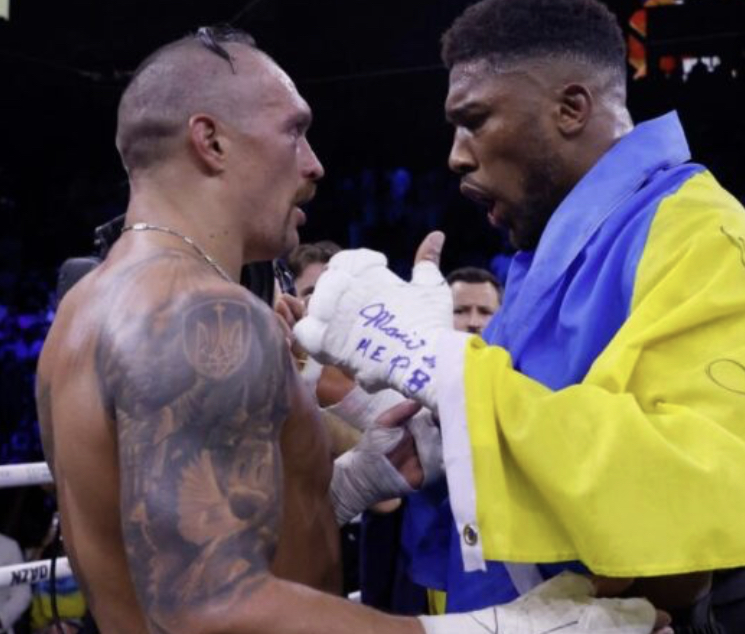 Oleksandr Usyk (20-0) defeated Anthony Joshua (27-3) by split decision in the rematch, retaining his WBA, IBF and WBO heavyweight titles on Saturday at the Jeddah Superdome in Jeddah, Saudi Arabia.

The defending heavyweight champion before the two fighters met for their first bout in September, Joshua had a better performance in this rematch under the supervision of his new trainer Robert Garcia, but it wasn’t enough to stop the Ukrainian boxer.

From war to the ring

Until March, Usyk was fighting in Kyiv on the frontline. He dedicated this victory to Ukraine. “I devote this victory to my country, my family, my team and to the military defending the country,” he said on the ring after the fight. “This is already history. Many generations are going to watch this fight, especially the round when someone tried to beat me hard. But I turned it in a different way.”

The 35-year-old the former undisputed cruiserweight champion moved up to heavyweight in 2019 and has won every clash in his professional career, including four bouts in his new weight category. His goal is now fighting another undefeated boxer, the supposedly retired 33-year-old Tyson Fury.

After starting his career with a 22-0 record, Joshua has lost three of his last five bouts. His reaction after his second loss to Usyk was unexpected and bizarre. After the split decision was announced (113 to 115, 115-113 and 116-112 for Usyk), Joshua grabbed two title belts and threw them over the side of the ropes. He then stormed off the ring and went toward the locker rooms. Then, he made a U-turn, stepped back onto the ring and grabbed the mic, delivering a strange speech about boxing and passion. “If you knew my story, you would understand the passion,” he said. “I ain’t no amateur boxer…I was going to jail, got bailed and started training my ass off. I wanted to be able to fight.

This guy beat me tonight. Maybe I could have done better, but it shows the level of hard work he put in. So please give him a round of applause as our heavyweight champion of the world.”

AJ was then criticized for not letting Usyk speak first and for throwing his belts.

Joshua’s altercation with a ref

Once Joshua was making his way towards the dressing room, he had an altercation with a man in the audience, who turned out to be a referee.

Security officers had to hold him back and ushered him to the locker room.

In the post fight presser, Joshua addressed his impromptu speech. “When you try and do things from your heart, not everyone’s going to always understand,” he commented. “It was just from the heart, I knew I was mad at myself…and I thought I have got to get out of there. Then I realized this is sport.”

“It takes real strength not to break me. Tonight there’s a little crack in the armor because I took a loss,” AJ added. Joshua wasn’t able to refrain himself from crying during the press conference.