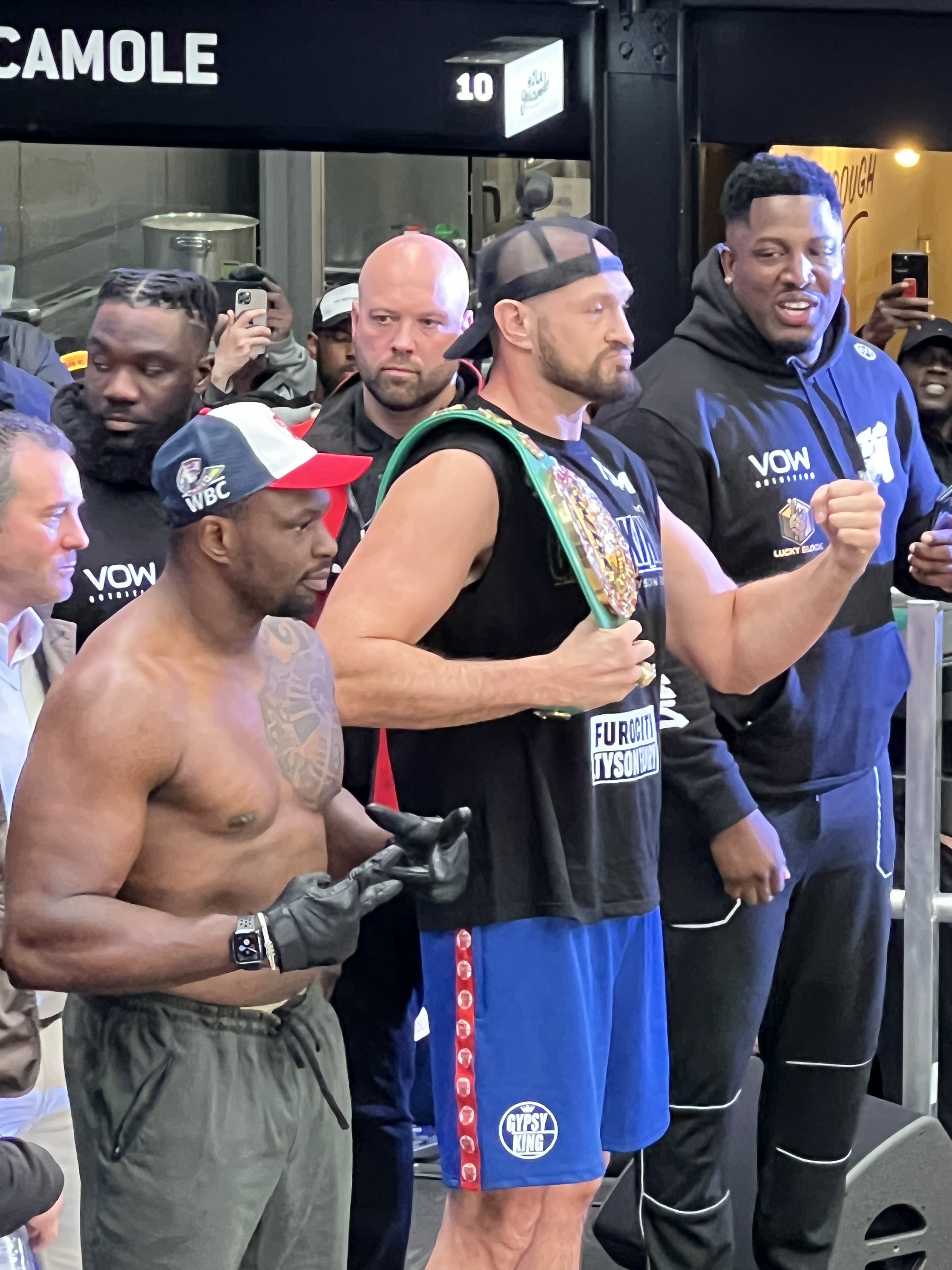 WBC and Ring Magazine champion Tyson Fury weighed-in at 264 lbs 13 ounces, over 12 lbs lighter than his last fight, the trilogy bout against Deontay Wilder. Despite still having some extra pounds on his belly and around his waist, the “Gypsy King” said he was in great shape for his first bout in the UK in over three years.

“Respect to Dillian and his team, proper professional men,” Fury said. “We are going to give you a real fucking fight. Don’t doubt us. We are going to put on a show. It’s going to be a war,” he added.

World title contender for the first time, 34-year-old Dillian Whyte, hit the scales at 253 lbs 4oz while being booed by the Fury-loving crowds at Wembley’s Boxpark in London. “It’s taken a lot of time, a lot of money, a lot of patience,” Whyte said. “But I am ready to go to war.”

Fury’s lighter weight could suggest a change of tactics: The Briton might plan to go back to using his quick feet and fight at range to outbox his opponent. Whyte is 6 lbs heavier than before his 2021 knockout of Alexander Povetkin.

The two British boxers will fight in front of a 94,000 fans at Wembley Stadium, a post war record audience for the UK.

There was a friendly atmosphere during Friday’s weigh in. Fury made sure to pinpoint his height advantage -6’9” vs Whyte’s 6’4”- bending his legs a few times to get to Whyte’s height and then standing up with straight legs. The fighters not only shared hands, but they also swapped baseball hats and tickled each other. They even danced in unison one next to the other, smiling.

Both fighters seemed focused. No signs of any leftover bad blood. “As you can see, I’m in fantastic mood. My spirits are high,” Fury said. “He looks focused, he looks ready,” he added about his opponent. “But at the end of the day, he can’t beat the Gypsy King. No born man can. I proved it time and time again.”

Whyte has won 28 fights with 19 KOs, but he has two losses on his record. He lost to Anthony Joshua on 2015 and was knocked out by Aleksander Povetkin in 2020, although he returned the favor to the Russian seven months later.

Fury has an unbeaten record of 31 wins, 22 knockouts and one draw. He suggested he will retire this weekend, no matter the outcome of the bout. Many fans would love to see him fight Joshua or Usyk.

Is Fury retiring or facing Joshua/Usyk?

Anthony Joshua is expected to fight Oleksandr Usyk in a rematch this Summer. The winner of Fury-Whyte could face Usyk or AJ for an undisputed bout this year. Will Fury really retire?