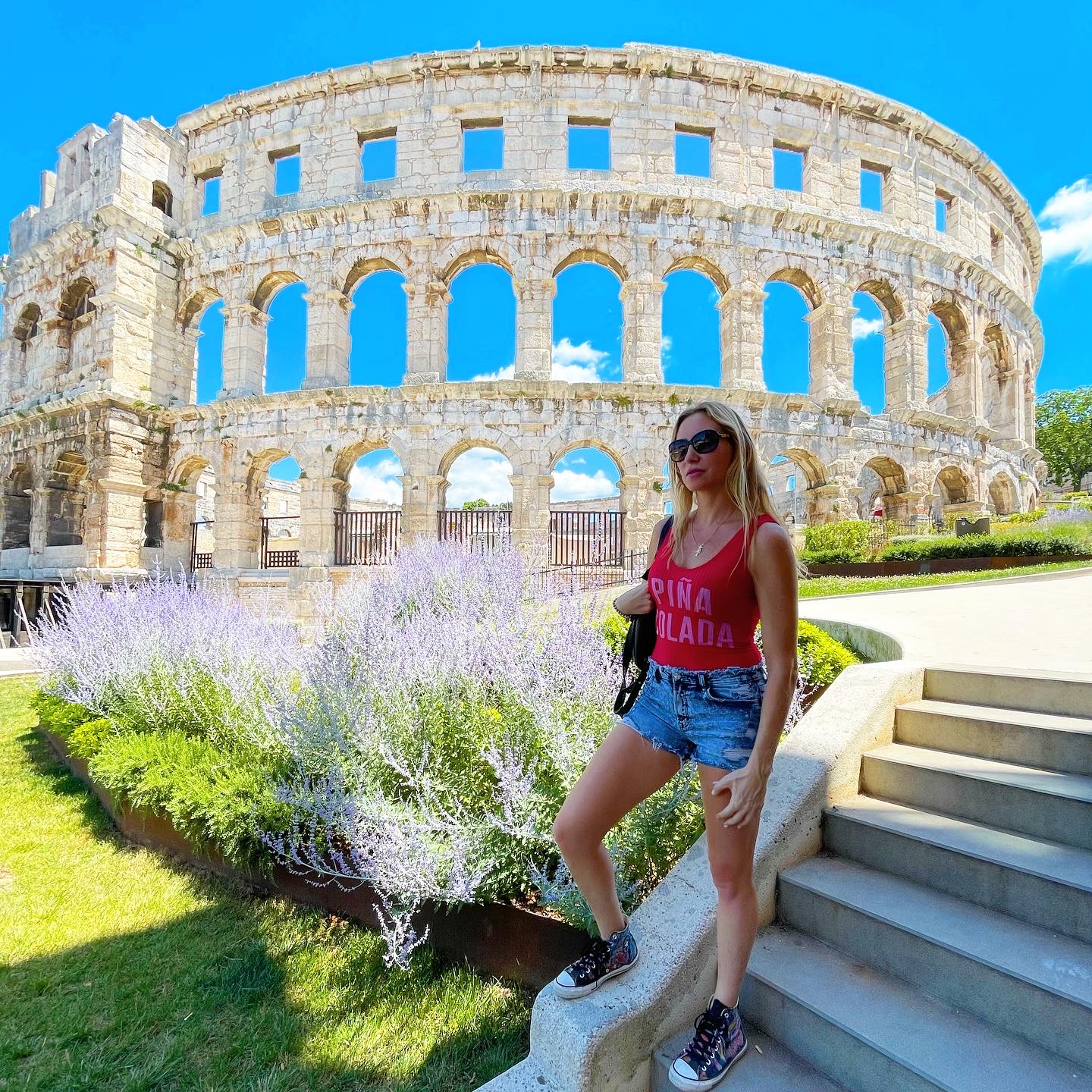 I start my COVID-related exile with a disappointment. After my check in at the airport in Naples (Italy), I find out my airline has suddenly added two extra stops to my flights.

It has taken me over six hours to find a plane ticket from Italy to Croatia that doesn’t cost a fortune. It was supposed to be a long journey from Naples to Pula with a 16-hour layover in Brussels. No certainty whatsoever on the travel requirements: Do I need a COVID test or having a vaccine certificate is enough? Is a rapid test good enough or I need a PCR?

Before entering the airport, I take the rapid test my sister booked during a nice dinner in Naples with my family on the previous night. I get to the check in area and they don’t ask me for anything: Not the COVID test, not the vaccine certificate.

I check my overweight luggage at no extra cost and head to my gate.

It feels too nice to be true. Suddenly I get the first bad surprise: My flight is not going straight to my layover city, Brussels, but is heading South first, stopping in Palermo (Sicily).

I’m early, so I get to try on and buy a yellow bikini at Yamamay.

I check the travel document for my second flight and find the second bad surprise: My other flight from Brussels to Pula is now stopping in Dubrovnik first. I’d have never bought a ticket with three stops besides the 16-hour layover in Belgium. Moreover, I’d have much rather stopped in Dubrovnik as Pula is six hours away from my real destination, Split, while Dubrovnik is much closer.

I confess this was supposed to be a trip with my sister, but I made a mistake and booked our tickets for July instead of June. Freudian mistake meaning I don’t want to leave Italy. I am forced to be 14 days in a non-Schengen country before being allowed to re-enter the US. So I’m headed to a two-week vacation that feels more like an exile. I’m also thinking about getting my passport stamped in Croatia – which is in the European Union, but not in the Schengen area – and then secretly go back to Italy for at least a week before going back to Croatia and leaving from there to the US. Dangerous maybe: If the US customs find out, I won’t be allowed into the country for at least 10 years. COVID has been restricting our freedom for too long.

Don’t get me wrong: I love vacations, I adore traveling. As I often say: I live to leave. The only thing is I don’t want to be forced to be on a trip and have a limited amount of destinations to choose from.

I had been away from Italy for almost two years because of the pandemic and wanted to spend as much time as possible with my family and dogs. I asked the American Embassy for the National Interest Exemption to be allowed back into the country as a journalist, but the automated email reply said I might get an answer in sixty days.

Not an option. I have to go back to work in NYC. I am forced to leave, but have a feeling the US border might open in a few days so I can go back to my hometown (Naples).

When we land in Sicily, nobody knows if we have to stay on the plane or get off. We end up staying on the airplane.

I’m in Palermo waiting for passengers to board, so I can get to Brussels. More than on an aircraft, it feels like being on a bus. When I boarded in Naples there were people on the plane coming from who knows where. Same thing now that 49 passengers are boarding in Palermo. “I only hope they will not add any more stops,” I say over the phone to my lawyer cousin while I’m thinking about suing this never-heard-before Belgian airline, TUI Fly.

It’s a surreal situation. Just like my exile to go back from my homeland to my NY home. Thank you COVID.

While on the airplane, I get to book a 36 euro hotel for my layover.

It looks like this trip is going to be another crazy adventure.

When I finally get to Brussels and am thinking about lunch, I find out the fun isn’t over yet. I get to passport control and the policewoman keeps me there over ten minutes. She can’t understand how I can be going to Pula as they have no flights to that destination. I tell her I have a stop in Dubrovnik first, but she says there are no flights to that city either. Then I explain my flight is at 6 A.M. of the following day. She lets me through. I somehow end up at another passport control. This time it’s a guy. He asks me where I’m coming from.

“Naples, but the plane stopped in Palermo,” I say.

He seems puzzled. “But it’s impossible. So there are no controls, it’s insane” he says.

I explain my situation and make sure he understands I’m not happy either with this crazy travel plan.

“They didn’t have a flight from Naples to Pula?” he asks me.

I tell him I couldn’t find any and I’d have stopped in Dubrovnik had I known my plane was going there. He asks me to take down my mask and finally lets me through.

The Brussels visit is short and not extremely pleasant. I get a hotel that turns out to be a hostel. Luckily I have a private room. It could have been worse: In the hall there was a lady complaining she wasn’t comfortable sleeping in a room with unknown men.

At least, it’s in the city’s historic center and I have no men or women in my room. I get there by train as it’s very close to Brussels Central station.

Gaufres and chocolate, but no fricadelle

I eat a huge gaufre (Belgian waffle) with banana and chantilly. That’s the highlight of my pitstop in Belgium. Not even the time to get to Grand Place and it starts raining. My early dinner is quite disappointing. I order two Belgian specialties: Fricadelle beignets and “French” fries. No offense for Belgians but, to be honest, I really can’t eat much of the fricadelle. The taste of meat is too pungent. Who knows what kind of meat they used? Apparently, it’s a secret.

Also, the fries’ taste is too strong for me. In Belgium they use some duck or other animal fat to fry the potatoes.

What we call ‘French fries’ is allegedly a Belgian dish. American soldiers stationed in the Francophone region during World War I dubbed the potato specialty ‘French’, but – to be precise – they were in Belgium. While this country is petitioning Unesco to endorse the fry as an icon of the Belgian cultural heritage, some historians and most French people don’t agree.

I come to the conclusion that Belgian cuisine is not really my thing, but I am not opposed to giving it another try. I don’t remember having such a bad experience the other times I have been in the country. Might it be my exile mood?

Luckily I had bought some Belgian chocolate, so I can end my meal and evening in a pleasant way.

I go to bed early as my alarm is at 3AM.

My plane to Croatia leaves at 6AM.

This time, no problem passing the customs. They do ask me for a PCR Covid test though.

We land in Dubrovnik and we are instructed to stay on the aircraft. Then, they change their minds and tell us to disembark: Passport control in Dubrovnik. I get the long awaited stamp to semi-freedom.

I can’t go back to Italy, the place where I want to be right now.

The custom police asks me why I’m taking another plane to Pula if I am staying in Split tonight. Dubrovnik is much closer to Split, while Pula is an over 6-hour drive. Well, great question! This was the only flight I found to Croatia and I had no idea it was stopping in Dubrovnik or I’d have planned accordingly. Now I have a rental car in Pula. Plus, I’d love to see the Roman amphitheater and the city of Zadar on my way down to Split.

I had made a car reservation with drop off in Split, but this phantom rental company I booked from on rentals.com tries to get me to pay any kind of fees, including a $1000 deposit which they will devolve in a month. Insane. I can’t cancel the reservation and have to switch to Sixt. I get a Brand new Clio for the day. I’m the first customer driving it. The money for the other rental car is just lost.

I visit the Pula Arena, One of the best preserved Roman Amphitheaters in the world. I have a nice, although frenetic, walk in the historic center of Pula. This town used to be called Pola and belonged to Italy. This region is called Istria. I see the nice Augustus temple and the Herculean Arch. There’s no way to pay for parking except for local coins. Not being in the Euro zone, Croatians use Kunas. I need to exchange a little bit of money and get some local currency.

I have a nice lunch at Piazza Nove, behind the Augustus temple. Tuna is not usually my fish of choice, but the Nicoise salad is really good. Maybe I just like tuna steaks in Croatia. It becomes one of my favorite dishes here.

I’m on a roll. Fast pace: I want to see as much as I can. Wanderlust at its best, despite the very early rise.

On the road to Zadar, on the Dalmatian coast. It used to be called Zara and belonged to Italy as well.

It’s an impressive port on the sea. I can’t miss the Sea Organ, an experimental music instrument mounted beneath a staircase right on the ocean and played by the waves of the sea. I like it.

I have a nice tour of the old town, buy some dried fruit and have a quick dinner waiting for the sunset light. I run to see the Greeting to the Sun, a unique monument that lights up at night. Awesome ambiance!

I drive to Split and get there right before midnight. The city is very vibrant at night.

More in the next chapter of my exile adventure…