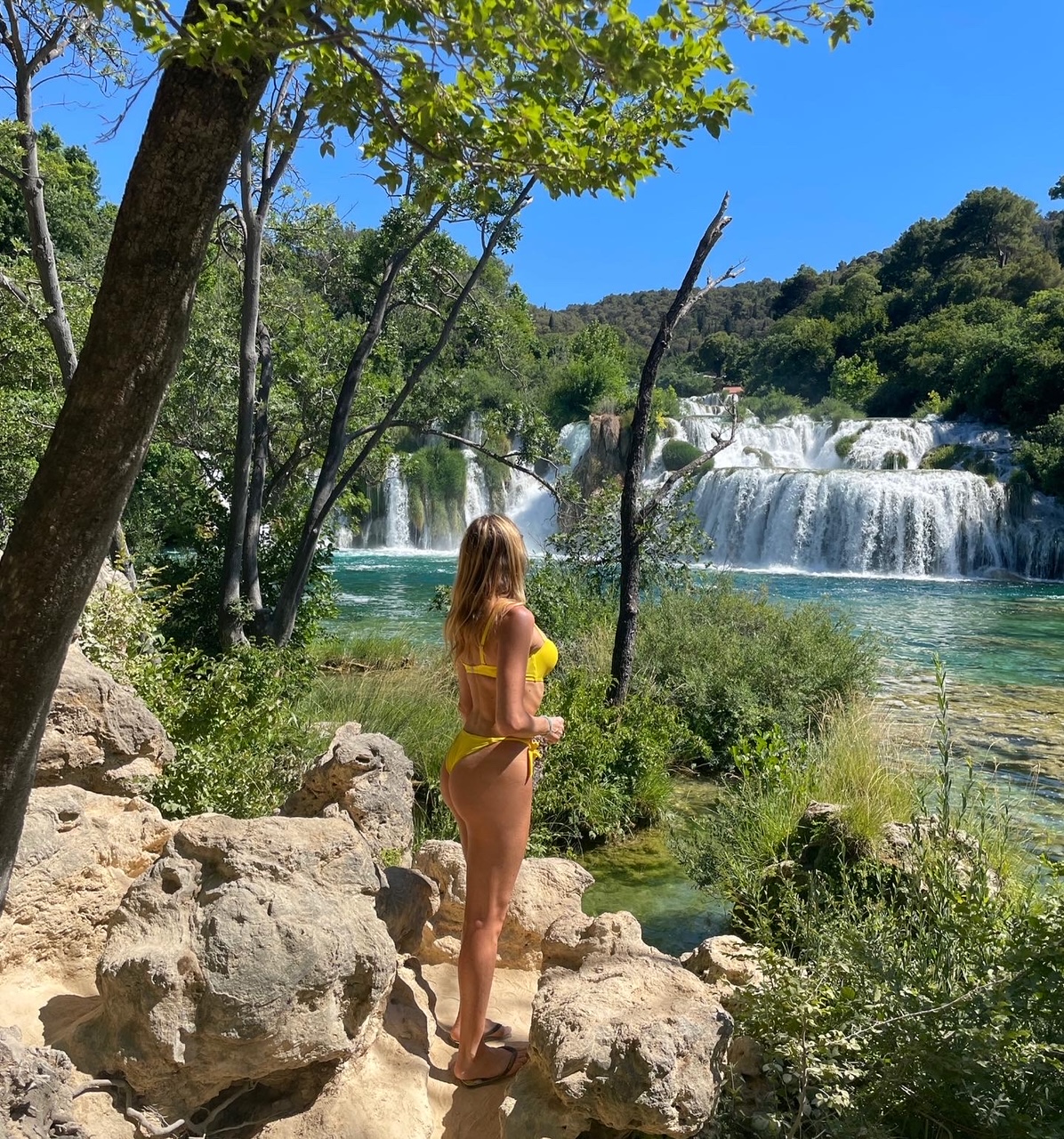 I am staying in a nice Airbnb in the Old Town of Split, not far from the harbor. After getting some burek for the road from a local bakery, I get back in the car and drive back north to visit Krka National Park and Waterfalls.

This park is phenomenal. The waterfalls are breathtaking and the lake’s water is so transparent you can see thousands of fish. Too bad it’s not allowed to swim. The trail to the waterfalls is very beautiful.

I drive to the smaller waterfalls a half hour away and swim very close to them. Water coming from the falls is powerful and very cold. It’s reinvigorating.

After my short swim, I run back to the car. Time to get to my next destination. I’m on a tight schedule.

I visit the old town of Sibenik, the first European city to have electricity thanks to Nikola Tesla’s visionary project.

I get an ice cream from Valeria ice cream and coffee place. How could I have missed it?

I drive to Omis to do the zip line but it’s closed. The old town and the small port are very cute though.

I drive back to Split and have some fish & meat skewers at 11P.M..

I drop off my rental car, visit the Pazar (marketplace) and buy some local products, including fresh figues and sugar -coated orange peels.

I get a fresh juice and visit part of the huge Diocletian Palace, built for the powerful Roman Emperor at the turn of the 4th century AD. The palace was a combination of a luxury Summer house and a military camp.

I have lunch at Villa Spiza, a small restaurant in a tiny street, very popular among the locals. I eat roasted eggplant and young cow’s cheese for 9 euros. Very good.

I feel tired so I buy some sweets, water, and go take a nap.

I book the 5 Island and Blue Cave tour for June 30. The weather conditions and winds are not favorable tomorrow.

I need to stay in Split one extra night. As you might be able to tell, there’s no planning at all in my trip. That’s the way I like it.

I exercise a bit and then have a nice Croatian dinner just outside my Airbnb, at Corto Maltese freestyle food. Tuna steak it is, but with a nice twist.

I take the 12 bus from the port area to the Süma Marian park. I rent a sun bed at Bene and go for a 1-hour swim.

When I get back to town, I go see a dermatologist for my insect bite that got infected. “Absolutely no sun,” the doctor says. Almost impossible: I have the boat tour scheduled for tomorrow!

I have dinner at a fish place in the port and get some fried squid.

The 5 island tour leaves at 8, which almost made me decide not to do it.

We meet at the harbor at 7:45. I’m half asleep during the ride on the speedboat. Forced in a weird position, like riding a horse.

The blue cave is closed so far because of waves so we stop for one hour and a half at the island of Komiza, known for its little church dedicated to St. Nicholas, the protector of the sailors.

The island is a tiny fishermen village. I buy a little red bag  for the beach, have an apple pastry at a local bakery and fresh orange juice at Café Orion.

We get outside the Blue cave, but the southern winds push the waves up so much that the bead is almost all underwater. It’s forbidden to swim, so I am not able to go and check it out. My explorer soul is frustrated, but there is much more to come.

We stop at Stiniva Cove, which is among the most suggestive beaches in Europe.

It used to be a cave, but it collapsed. Legend says a dragon was cornered in the cave by pirates and to escape it destroyed the cave itself.

I swim about a half hour. I jump from the speedboat and swim to the beach to find out it’s not made of sand, but of little stones. Then I swim around the little gulf, but there are too many boats. This place is better in low season.

We get to the second swim stop, the Blue Lagoon, which owes its name to the color of its water. Really impressive beauty.

I take some underwater videos and photos with my iPhone.

We ride to the island of Vis, which used to be a military base.

Our boat gets into a tunnel/bunker built by the Italians during World War II to hide war ships (patrol boat pen). It’s impressive how clear the water is. I’d jump in.

Vis (Lissa) belonged to the Republic of Venice until 1797, then it was under the rule of the Napoleonic Kingdom of Italy and, later on, of the Austrian Empire. After World War I, the island was again ruled by Italy until 1921 and then ceded to the Kingdom of Yugoslavia. Occupied by Italy again during World War II between 1941 and 1943, it was ruled by the British and then went back to Yugoslavia after the war. Vis is the farthest inhabited island off the Croatia’s mainland.

After our interesting pit stop, we ride to Hvar, the sunny island. It’s also the most expensive and posh island in Croatia.

I visit the old town, have lunch in a place suggested by locals to avoid the famous Hvar rip offs (Mizarola), then walk up to the Fortica (about 30 minute-walk), a fortress built by a Spaniard whose boat crashed on one of the islands in front of Hvar.

He was saved by people from Hvar and built the fort for them to show his gratitude.

Views from up there are breathtaking. A perfect place for a picture or a kiss.

Close to the harbor, the historic theatre has a very characteristic architecture. Established in 1612, it was one of the first public theaters in Europe.

The ride back to Split on the speedboat takes about one hour. I transfer my bags to another Airbnb, where I have the whole building for the night for $47.

I have dinner at Fabrizio at the port. My Croatian exile is starting to look pretty awesome. Still, I’d use some new stamps on my passport so I decide to do something a bit crazy and visit another country.

I am up before 6 A.M., too excited for my road trip to stay in bed. I get an Uber to the Split airport and rent a car from Avis. They ask me if I’m staying in Europe with the car or going to countries such as Bosnia. When I answer that Bosnia is in Europe, they deny it, irritated. I can feel the Balkan hate. I am talking about Europe, not the UE.

My Volkswagen Polo only has usbc plugs to charge the phone and not usb. Without my phone I’m doomed as it’s also my GPS. I waste about one hour trying to find an adapter. One precious hour I could have used to explore. I buy a car plug that starts working only after the phone’s battery goes down to 18%. Better late than never.

I pass the border and Croatia’s police asks me why I’m going to Bosnia. I can tell they don’t appreciate the thing. Bosnia’s policemen at the second part of the passport control seem happier about my visit and ask for my vaccine. They stamp my passport: My country n. 48. Is this stamp going to be an issue when I will have to get back to the US? Big question. It should be ok, as I made sure to verify that Bosnia is not in the Schengen area. But you never know…

I drive to Kravice waterfall, another wonder of nature. Water is green, much darker than Krka Falls. Here you can get in the water though and the waterfalls are larger. I’m not sure which falls are more beautiful. They’re definitely both worth a visit.

I ask local people to take pictures of me in front of the waterfalls and I get a real personalized photoshoot. I climb in the falls with a Bosnian that becomes like my personal pro photographer. He suggests shots and locations.

But “Time is of the essence”.

I stay there until 12:30 and then drive to Mostar, a city where the Ottoman domination is so apparent it feels like I’m in Turkey.

After a little tour of the pebble streets, full of bazaars with oriental products, I walk across the Stari Most, the famous bridge built by the Ottomans in the 16th century.

It’s one of the most classic landmarks of Ottoman architecture in the Balkan region. Unfortunately the original bridge was destroyed during the Balkan war and this is a replica. It’s still slippery and suggestive.

I get an ice cream on the other side of the bridge while I try to charge my iPhone’s battery and hop in my car for the next stop: Dubrovnik’s airport to pick up my mom. Google takes me to some very isolated unpaved roads and I’m scared for the tires of my Polo rental. I drive in front of a jail. I have a snake encounter and also meet a lot of cows. No humans, which is good sometimes. I’m getting late for the airport pick up. These streets force me to drive slow. Twenty-five minutes later, finally asphalt is back!

I buy some burek from a local bakery and I’m impressed by how cheap it is. A brioche, two huge bureks -one with cheese and one with meat- plus a bottle of water is 3 euros. Then they just want 2.5 euros. I add two more drinks. I should have bought more: Besides being the least expensive bureks, they’re definitely the best I have ever tried.

Customs adventures: Back to Croatia

New passport control. All ok on the Bosnian side. Second stop on the Croatian side: “Why did you go to Bosnia?” The police asks. I tell them I wanted to see Mostar. They let me pass. I see another little house but it’s empty, so I think the customs control is done. I am about to pass it when I hear someone screaming to come back. Upset. I tell him I didn’t see anyone in the little cabin so I thought I was done. “Nothing to declare?” He asks. “No,” I say.

“What were you doing in Bosnia?” Again that question. “I visited Mostar”.

“What are you bringing with you?” He asks.

“My luggage” I answer.

“What’s in your luggage?”

“That’s all there is?” He insists.

“That’s it? No cigarettes, alcohol?”

“I hate those,” I answer, thinking it’s getting late.

“No food?” He continues.

Well, I think about the warm burek diffusing their great smell throughout my car. “No, no food in my luggage,” I say.

The bureks are not in my luggage, but on the passenger’s seat

so technically I’m not lying.

“Open your luggage,” He commands.

I open my suitcase and show my shoes and clothes. He lets me pass.