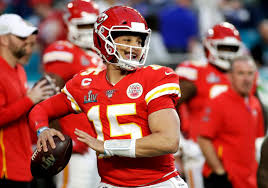 “My dream was to give my coach (Andy Reid) a Super Bowl” said quarterback Patrick Mahomes after having delivered the first championship in a half century to a thrilled Kansas City fan base.

The Chiefs came back from a 10-point deficit for the third time in a row these playoffs, another NFL record.

Coach Andy Reid won his first Vince Lombardi Trophy in 20 years. “I am going to get the biggest cheeseburger you’ve ever seen” he said during the celebrations.

Mahomes completed 26 of 42 passes for 286 yards, two touchdowns, and two interceptions.“We never lost faith,” he said on the field at the end of the game, covered in a rain of confetti. “I think that’s the biggest thing. Everybody on this team, no one had their head down and we believed in each other. That’s what we preached all year long” he added.

Latin flavor for the halftime show with Skakira and Jennifer Lopez perfoming along with rapper Bad Bunny, J. Balvin and JLo’s daughter Emme.

As usual, car, beer, and snack commercials dominated the Super Bowl breaks. Despite last year’s 98.2 million viewers were the lowest ratings in over a decade, the NFL Championship game is still the prime programming slot for advertisers, with a cost of over 5 millions for a 30-second spot.