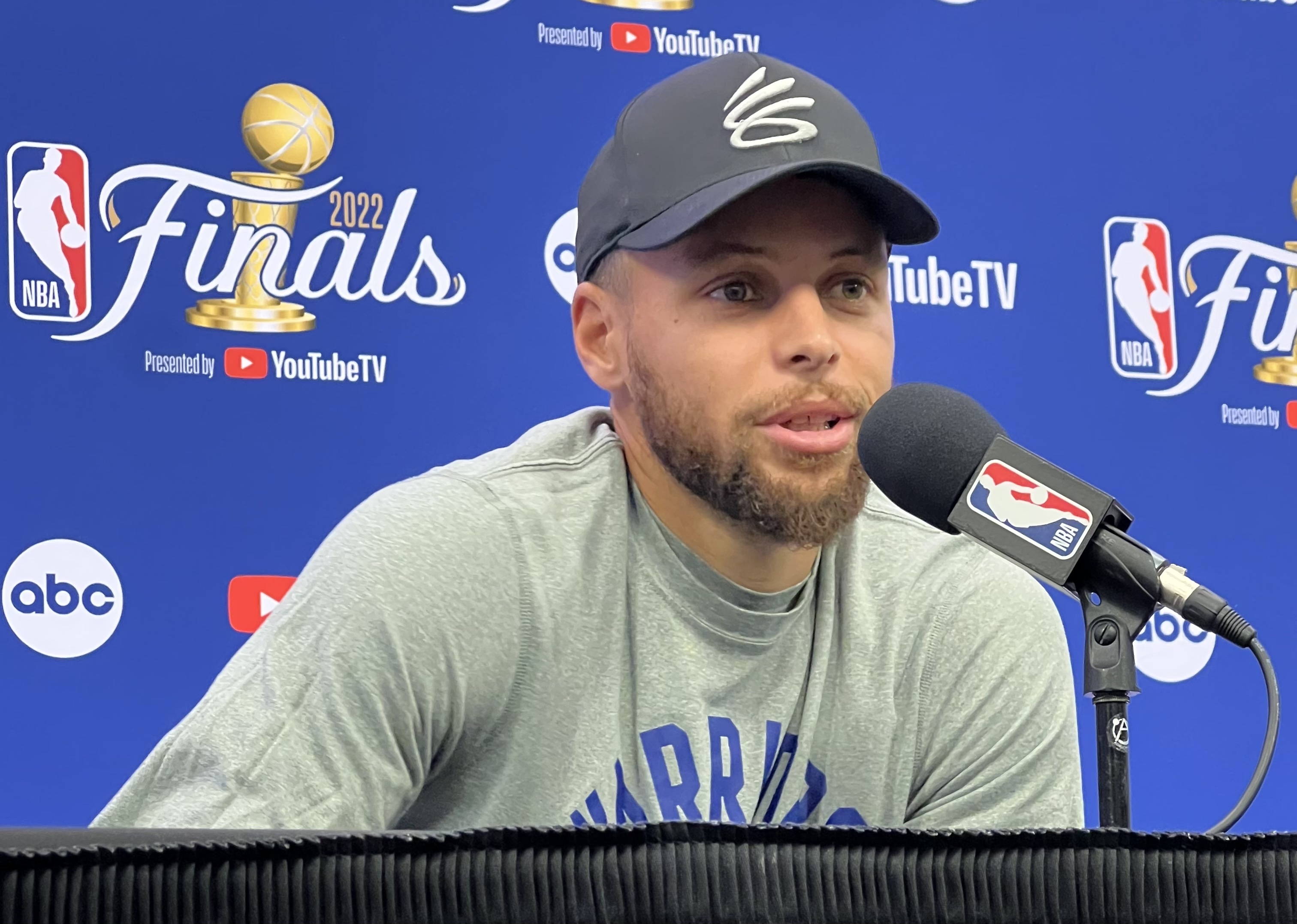 With 43 points and 10 assists, Steph Curry led the Warriors to a game 4 win in Boston to even the series 2 games a piece. The finals move to San Francisco for game 5.

What happened to Steph’s foot pain? He just doesn’t think about it while he is on the court.

” It means everything knowing the sense of urgency we had to have tonight to win on the road and keep some life in the series, get home-court advantage back and try to create some momentum our way,” Curry said.

“It was a hard-fought win. I think the first quarter really set the tone. Even though we were down one, it was a night and day difference between Game 3 and Game 4 how we came out defensively, and that just gives you enough life to withstand some rough patches. And then, you know, find some runs. We get some stops, get out in transition, guys get involved. And you give yourself a chance to win it down the stretch. Proud of everybody in terms of our physicality, our focus, perseverance throughout the game. 2-2 is way better than 3-1 going home. Job well done tonight.”

This is the second-most points in an NBA Finals game for Stephen Curry, whose career high in a Finals game is 47 points in Game 3 in 2019 against the Toronto Raptors.

His 25 threes for the series are the most in any four-game span in the NBA Finals.

Wiggins: All you can do is watch

His teammates are in awe, even if they always expect greatness from him. ” All you can do is watch,” Andrew Wiggins commented. “When Steph has the ball sometimes, you just watch and see what he does. He’s the type of player that can go into the zone and get everyone involved.”

Wiggins had 17 points and a career-high 16 rebounds to close the game with the second best performance for the Warriors.

While Curry didn’t want to rate his performance, his “Splash Brother” Klay Thompson said this was Curry’s best game in a final.

Klay’s magic touch is coming back

After two years of rehab, Thompson is back in the finals and seems to be finding his magic touch once again.

“You know, I got some great looks all night, and come playoff time, especially in the Finals, it’s hard to get good looks,” Thompson said. “Teams going to blanket us. So when you get that little, you know, space, you’ve got to let it fly. Been in this league too long to ever doubt myself, especially in the highest pressurized moments. You’ve just got to let that thing go and trust your word, trust your touch, and luckily I made them when they counted.”

Thompson finished with 18 points and crucial baskets in the fourth quarter. “Well, we have reestablished home court again. We can’t look ahead. We’ve got to play with that same force in the fourth quarter that we did, bring that Monday. And it’s going to be rocking there in Chase Center. I can’t wait to see our fans. I know they are excited. Sure, it was rocking in there tonight. So we can’t look ahead. Just be present and embrace your off-day, but then get some good work Sunday. And then when Monday comes, just live in the moment, because you don’t do yourself any good if you’re looking ahead to Game 6 or 7 or a championship. You’ve just got to embrace these moments. It’s special to be one of the last two teams playing, and I know we’re all going to bring it Monday. We’re so excited. This was a special night for Dub Nation,” Thompson added.

Difficult loss for the Celtics on their home court. ” It’s tough. You’ve got to give them credit, they played well. They made some big shots, things like that,” Jayson Tatum commented. “We obviously felt like we put ourselves in the position to win the game. There’s a lot of things we wish we would have done differently, especially on the offensive end. I think we just got way too stagnant late in the fourth from everybody. But it’s a new series, so best-of-three. Get some sleep and get on this long-ass flight tomorrow,” Tatum added, smiling.

Klay Thompson, the power of perseverance. Being back in the Finals after two surgeries
Klay Thompson: il potere della perseveranza. Tornare alle Finals dopo due operazioni