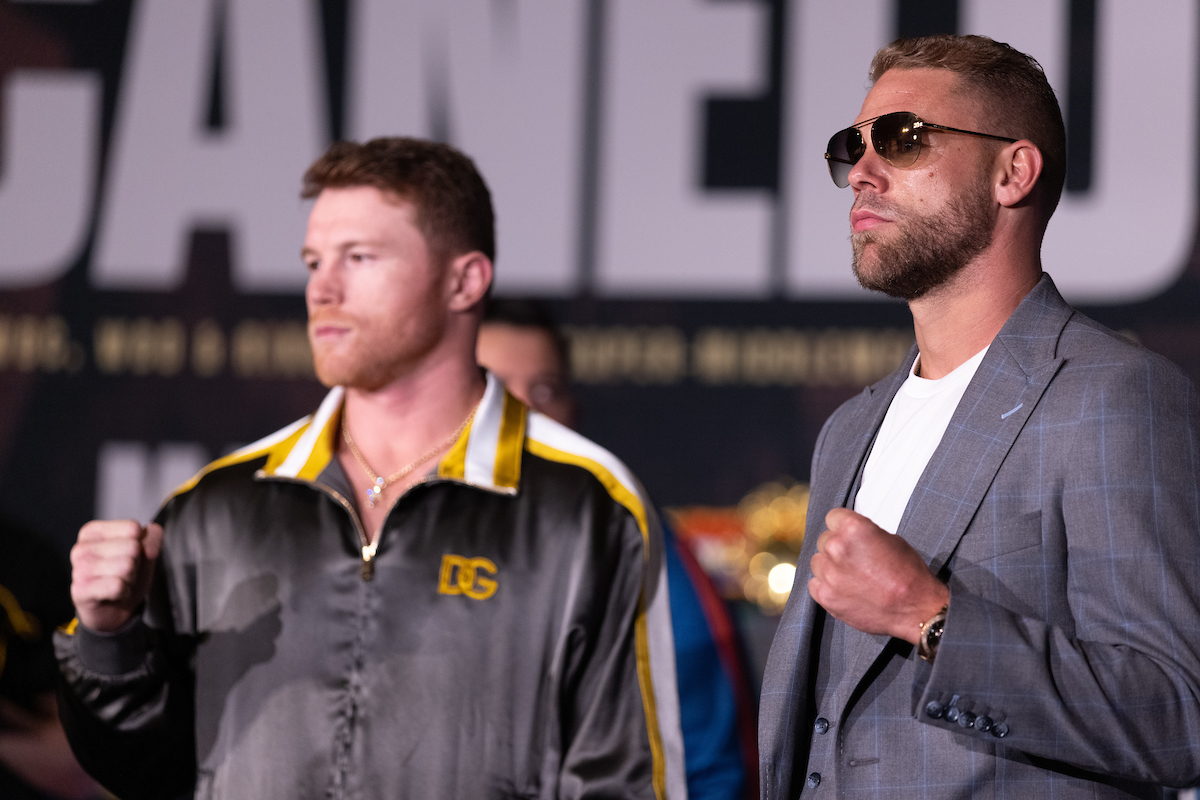 The Mexican world champion caught Saunders with a brutal uppercut, causing a quadripod fracture to his orbital bone (per Mike Coppinger, The Athletic), in essence a complete blowout of the orbital.

Former IBF welterweight world champion Kell Brook suffered a similar injury in his 2016 loss to Gennady Golovkin and then again -to the opposite eye- when Errol Spence Jr defeated him in 2017.

When British heavyweight Daniel Dubois suffered an orbital bone fracture in his loss to Joe Joyce last November, Saunders showed zero compassion. “Before I go on one knee, I’d like to go out on my back with my pulse stopped” he commented.

A different reality unfolded: After being violently hit by Canelo’s uppercut in round eight, Saunders had troubles keeping his eye open and he could be observed mouthing “no” to his corner. His coach Mark Tibbs threw the towel, informing the referee that he was pulling his athlete out of the match. Tibbs said he decided to stop the fight when Saunders said he could not see out of his injured eye.

“He’s a young man,” Tibbs told ESPN’s Ben Baby. “He’s got a family. He’s got children. I’ve known him a very, very long time. He lives to fight another day.”

After dominating the round, Alvarez told his trainer Eddy Reynoso that there was “no way Saunders would come out for round nine” because he “broke his cheek”.

‘‘When you break a cheekbone, you can risk your life and you can’t continue that way” commented Canelo in the post-fight press conference.

Matchroom promoter Eddie Hearn said the British fighter “will need several months of recovery time” and “will be out for a very, very long time”.

There is no guarantee the injury will heal adequately to allow Saunders to resume his career.

The Briton had some success during the middle part of the bout, but Canelo’s brutal uppercut in the eighth round caused Saunders’ eye to swell up immediately. Alvarez landed more uppercuts and clean shots while his opponent was trying to stay on his feet and defend himself.

Saunders suffered the first loss of his professional career (30-1-14KOs) and was immediately transported by ambulance to John Peter Smith Hospital in Fort Worth, Texas, to undergo surgery.

Canelo was ahead 78-74, 78-74, and 77-75 on the scorecards at the time of the stoppage. With the win, he unified the WBA, WBC, WBO, the Ring super middleweight belts. The Mexican star will be a big favorite in his fight against the undefeated Caleb Plant, who has held the IBF title since 2019.

A win over Plant would establish Alvarez as the first undisputed super middleweight champion in the history of boxing.

As for the platform that will broadcast the bout, Canelo is a network and promotional free agent, who lately has an awesome relationship with Eddie Hearn: his last three fights were promoted by Matchroom boxing and broadcast on DAZN.

Plant is with Al Haymon and PBC, which has network deals with Showtime and FOX. Will this mean Canelo’s fight is returning to pay-per-view for the first time since 2018?

For our coverage of the fight and post fight, click here: Canelo to Plant after TKO win over Saunders: “I’m coming my friend”,

Canelo to Plant after TKO win over Saunders: I’m coming my friend
Canelo to Andrade: Get the f… out of here!
Loading Comments...