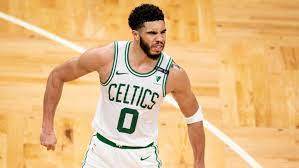 An incredible Jayson Tatum scored 50 points in game 3 against the Brooklyn Nets, leading the Celtics back into the series with a 125-119 victory. Boston pushed past a cold start in the game and avoided falling into a 3-0 trap against the favored Nets, making it a 2-1 series.

Game 4 is on Sunday evening (7P.M. on TNT) at Boston’s TD Garden and Tatum is looking forward to it. “Oh man, I can’t wait. It’s been a while since we had full capacity, I miss those guys, I’m sure they miss watching us play in person,” he said enthusiastic right after the game.

The 23-year and 86-day-old All Star became the third youngest player in NBA history to score 50 points in a playoff game, behind Hall of Famers Rick Barry (23 years, 21 days) and Michael Jordan (23 years, 62 days). Tatum  already made 50 points in the opening round of the play in tournament against the Wizards less than 10 days ago.

After struggling on the offensive end in the two games in Brooklyn, the 6’8’’ forward exploded in the first home game of the series.

“I am just trying to be better. I had a tough shooting night on game 1, didn’t play much in game 2 as I was poked in the eye,” he explained. “I am trying to redeem myself, I’m trying to do anything to win” he explained.

After losing the first two games against Brooklyn by double digits, Boston trailed by 15 points early in the first quarter, before getting back into the game and regaining control. The Celtics let by as many as 17 in the third quarter.

Kyrie Irving was contained to 16 points, while James Harden led the Nets with 41 points and 10 assists. Kevin Durant scored 39 points. Brooklyn came back, but was kept at arm’s length.