Islanders knock out Penguins, advance to round 2 to face Bruins 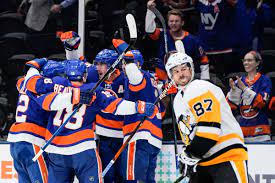 The New York Islanders knocked off the top-seeded Pittsburgh Penguins with a 5-3 win in Game 6 on Wednesday night to advance to the second round of the playoffs.

The Islanders will face the Boston Bruins in the next round.

“I liked our resiliency, I liked our physicality, I liked our detail,” coach Barry Trotz said. “Lots of good things. I liked the surge that we had with three goals in about three minutes there (in the second period). And then we battled.”

“This is a special place, a special group,” Nelson said. “Everybody wants to go out there and win and compete for a Stanley Cup and raise it, so to be seeing some progress and getting close, it’s awesome. It’s fun.”

In 2016 the Islanders won one postseason series for the first time in 25 years, but now they have advanced past the First Round for the third consecutive time under Trotz  and they’ve eliminated the Penguins for the second time in three seasons.

In the regular season, the Islanders won five out of eight games against Boston, with the Bruins winning the last three meetings over the final month of the season.

Game 1  of the Second Round will be in Boston at 8PM on Saturday, May 29th.