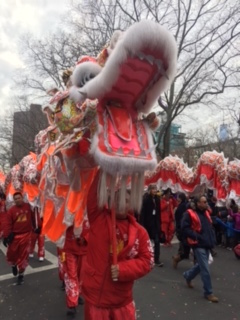 New York celebrated the Chinese new year with the Lunar New Year Parade in Chinatown this Sunday (Feb 5th), honoring the beginning of the year of the Rooster with dragoons, colored paper lions, dancers, singers,  Chinese TV personalities, artists, and lots of confetti.

The events and celebrations started on January 28th, first day of the lunar year, with the cultural festival and Firecracker Ceremony in Lower Manhattan’s Sara D. Roosevelt Park

Also known as Spring festival, as it is the start of the new season according to the lunar calendar, the Chinese new year is the most important holiday in Asia and it corresponds to the biggest mass migration in the world, as people go back home from the cities.

Also in New York, celebrations last over 2 weeks: from the Madison street to Madison avenue parade to the Queens parade in Flushing and to the Sunset park parade in Brooklyn.

The Metropolitan Museum of Art organized today a festival with performances by the Sesame Street Puppeteers, the Chinese Opera, paper-folding and drawing workshops.

The Museum of Chinese in America will host an afternoon of dance performances, arts and crafts, food sampling on February 11th.

The most amazing Christmas trees in New York
Diddy: There would be no BIGGIE without Brooklyn. BIGGIE night in Barclays Center
%d bloggers like this: