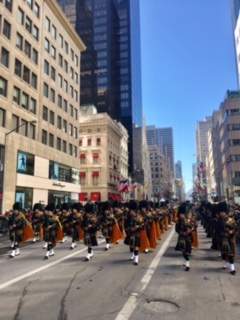 The St. Patrick’s Day parade in Manhattan honors the Irish heritage and the patron saint of Ireland, Saint Patrick.

Most Irish immigrants began arriving in New York around 1845 to escape the potato famine. Many of them settled in a slum district called Five Points, not far from today’s Chinatown and Little Italy.

The Parade started on 5th avenue and 44th street and went north on New York City’s the most iconic avenue up to East 80th street. Hundreds of thousands people, soldiers, bands, artists marched, from 11A.M. to 5P.M. in what’s considered the world’s biggest and oldest St Patrick’s parade.

The city’s first St.Patrick’s Day parade was held on March 17th, 1762, about 14 years before the signing of the Declaration of Independence, and it was comprised of a band of Irish military members and patriots serving with the British army stationed in the colonies in New York.

For the first time in history, the parade passed by the house of a US President, the Trump tower of 5th avenue and 56-57th streets.

The public crowded the sidewalks with a river of Irish flags, green hats, beads and green clothes.

Right after the parade, people started crowing all the traditional Irish pubs for a celebration of beer and booze. Please check your feed, the data was entered incorrectly.

Diddy: There would be no BIGGIE without Brooklyn. BIGGIE night in Barclays Center
Music in the air: The Dance Parade takes over New York City’s streets